The science behind Creative Spaces

I have always felt a positive or negative influence from spaces that I walk into or spend time in, and this has been a natural passion to explore during my design career. Kalukanda House is the embodiment of how the environment affects me and it was built through an instinctive design process. Maximising the experience of the enormous, established trees in our garden, working with natural colours and trying to create a sense of wonder in the surroundings was the driving agenda.

To search within ourselves and find what we are each drawn to is an ongoing process but science can help us understand some of what we know instinctively.

Charles Leon is a friend, an award winning designer and a thought leader on creative thinking. He is a past president of the British Institute of Interior Design and is the founder and content creator for Thinking Mind his platform for talking about The Art and Science of Creative Minds.

He moved his Chiswick based Interior Design studio to a beautiful garden office 4 years ago and here he shares some science backed thinking about WHY our environment affects us.

The Garden Office - a creative hub

We have always known that our environments affect how we feel and that when we feel good our ability to focus and think creatively is increased. Colour, light, views, sound, and atmosphere all have a profound effect on how we feel. Healthy environments have a direct effect on our physical wellbeing and, as a result, our attitude becomes more positive, and our productivity increases.

We used to run a thriving design studio in Chiswick with sixteen designers working in an industrial unit. We were motivated and enthusiastic and worked long hours. But we had no views to the outside world. The unit, although large, was windowless. It was a strange irony that we were designing buildings with health and wellbeing in mind and yet we were working in a “closed” environment.

Four years ago, as we approached the end of a lease, our landlord informed us that they were raising our rent by 90%. As a small business, this was unsustainable. So, we had to think differently and change the way we worked. Pre-Covid19, we built our garden offices and the quality of our lives improved by a factor of ten. Less commuting, more time around home and beautiful views of the garden.

We were lucky, we established our Garden office pre-Covid19, but now that the virus is here, the benefits of a carefully considered and designed Garden Office have been enormous. Environmental psychology, which studies how the built or natural environment affects how we think, feel and act, back up what we, as designers, knew intuitively. 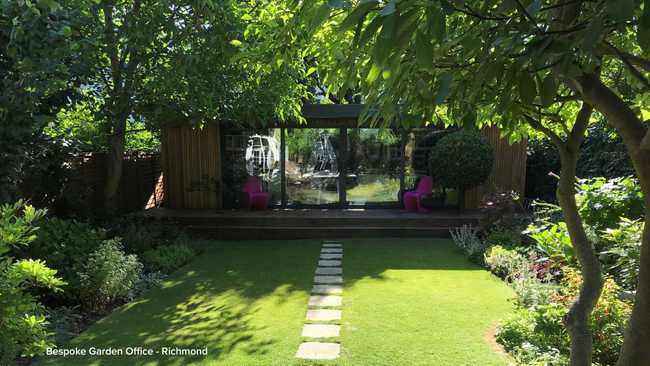 In 1984, Roger S Ulrich, studied the relationship of surroundings to experience by looking into patient recovery in Paoli Hospital. The subjects were all in similar rooms, the only difference being that some had windows that looked out to trees and the others looked onto a brick wall.

Those patients that had views of green leaves and sky, rather than brick walls, recovered faster, had fewer complications and needed less medication. Their environment had a measurable effect on their physiognomy.

The environment stimulated a tangible benefit which changed not only the physical but also the mental wellbeing of patients and improved recovery rates.

This applies to working environments. Full-height windows (we have them back and front) with views across the garden, create a sense of wellbeing and calm and enables break-out areas that are refreshing and recharging.

There is a connection between the control of our physical environment and improvements in wellbeing. Colour plays a vital role. Seeing natural colours as the garden blossoms and changes with the seasons enhance creative thinking.

In 2009, Zhu and Mehta of the University of British Columbia carried out a study to measure the effect of colour on two styles of thinking; Analytical: logical, linear and objective thinking and Creative: intuitive, abstract and subjective thinking.

They gave the test group various tasks which were on paper with either a Blue, a Red or a White border on it. The white border acted as a “control group”. The tasks were the same in all three.

What they found was that those tasks which had had a blue border engendered more creative answers than those with a red border, which performed better where analysis and logic were required.

This is useful when deciding, for instance, what colours will stimulate which type of thinking.

Our mental, idea space expands and contracts in direct proportion to our perception of physical space. The more open and expansive we perceive our space to be (the cooler colours, including Blues and Greens), the more open we are to new ideas. Conversely, the more constrained (the warmer colours, including Reds and Yellows) we perceive our space, the more focused and analytical our thinking becomes.

Colour in nature conveys the depth of space. Blue for distant depth and space, warmer for mid special areas, the warmest tones for things nearby. Cool Blues seem to recede whereas Warm Reds and Yellows come toward us, as in nature.

In 2006 Shashi Caan ran an experiment at a Design Trade show in New York with colourized event tents to study how people behaved when saturated by colour (there was a similar installation in Shepherd Bush, London in 1976). In the blue space, people tended to gather towards the perimeter of the space in groups, as if being pulled outwards. In the red space, people tended to converge towards the centre of the tent as if the walls were pushing them in.

And that’s what studies have shown; we are at our creative peak when the light outside is in the blue range. So, most of us would be at our most creative during the morning. 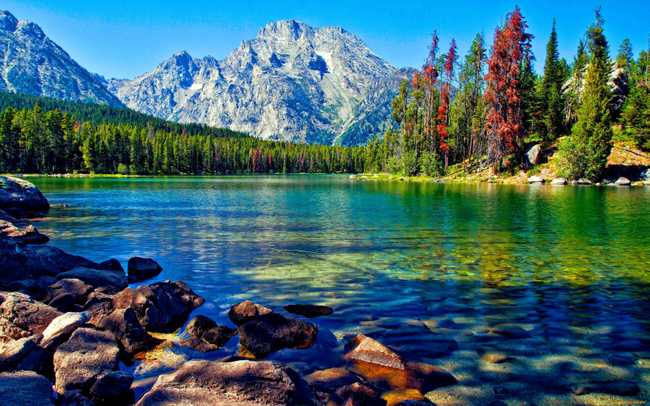 The sensation of space and volume also has a measurable effect on people’s behaviour. In 2010 McCoy and Evans conducted an experiment where they got students (it’s always students) to take an exam in a room with a high ceiling and a low, suspended ceiling. The perception of 3D volume affected those who were in the high ceiling spaces performed better on the creative tasks, whereas those who were in the lower ceiling room performed better on the analytical tasks.

This holds also for spaces that have a view to the outside as opposed to no view. Rooms with a view were better for creative pursuits than those with no view. This further confirms the connection between perceived mental space and physical space.

Within permitted development planning there are some restrictions on height and volume. We have found though, that clever design can give the perception of height and volume and enhance productivity and wellbeing.

Whilst less tangible than physical space, lighting nevertheless has a powerful effect on our feelings of wellbeing and behaviour. In our studio in Chiswick, we originally had flat, fluorescent lighting and several designers complained, particularly when selecting colours for a project, they had to go outside to see them in natural light. In our garden office, because we have so much natural light, we feel less tired and more energised. Selecting colours accurately is no longer an issue. Quite often we don’t even switch on any lights.

Optimum levels of lighting are essential for creative and analytical thinking. 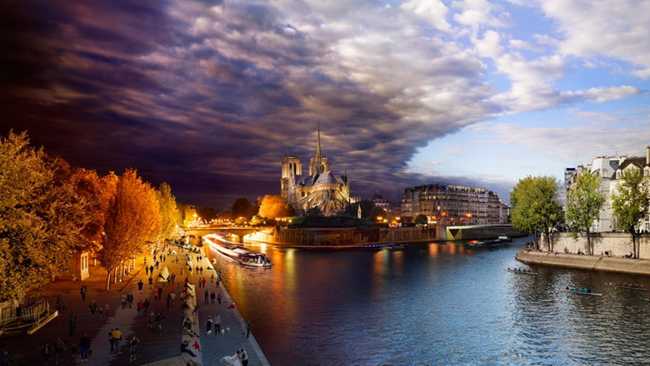 Daylight Colour temperature changes throughout the day from cooler tones early in the day to warmer tones during the evening. This sequence is known as the Circadian cycle and controls a lot of our natural body rhythms from muscle strength, energy levels, to sleep/wake patterns and our creativity.

This is where a garden office truly comes into its own. Better contact with the daily cycle will mean a better quality of life.

There have been many studies on the effect of stimulating environments and what is called “neurogenesis”, the production and retention of new neurons (brain cells). Until recently it was thought that you had all the brain cells you were ever going to have by the time you were in your early 20s and that it was all downhill from there. Not so, a Stanford University study proved that the quality of your environment, your sleep and your nutrition will have a significant effect on your ability to create and retain new neurons. The key here is “stimulation”. As with the study on recovering patients and the views they had, natural environments create a better sense of well-being, which translates directly into better cognitive skills. What we see and experience, particularly in nature, will manifest in our ability to solve problems.

Stress is one of the major causes of depression. Stress increases cortisol in the brain and body which increases inflammation and cognitive decline. The natural environment has been shown to reduce stress and therefore reduce the amount of cortisol produced which then reduces inflammation and allows better neurogenesis.

The conclusion, which comes as no surprise to most of us, is that a natural environment is good for you and helps to promote a sense of wellbeing, both mental and physical. The key though is stimulation; learning new things, immersing yourself in different cultures is all food for the brain and for the body.

Professional Designers understand how people behave, how they are affected by different stimuli and design spaces that optimise environments.

So, we built an office in our garden and used this as a hub for our business. Our productivity increased and the quality of life/work balance improved exponentially. By not having so many distractions I’m able to focus better on the task at hand. What used to take 1 day in the Chiswick studio, now takes a couple of hours. Life/work balance… nothing that a bit of dead-heading won’t solve.

The benefits of working from a garden office are almost incalculable. In 12 weeks we transformed how we work and how we live… but I didn’t need science to tell me that! 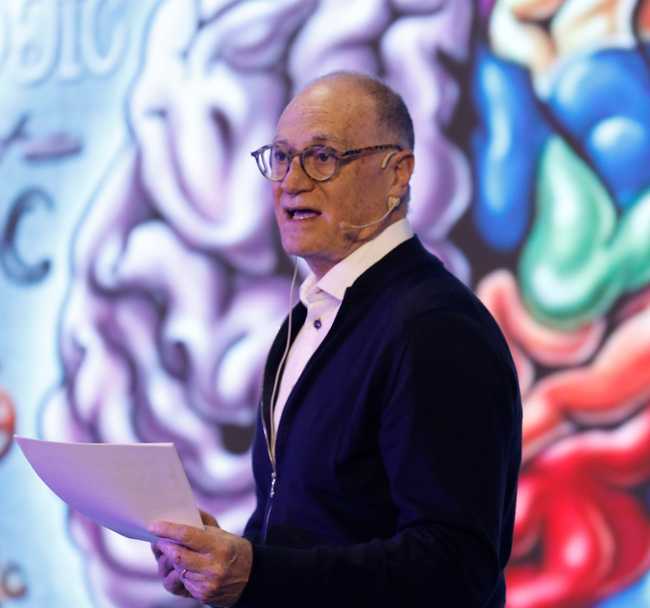 Charles trained as a theatre set designer and began his professional career working for the National Theatre and the English National Opera, this led naturally into designing for film.

In 1989, Charles was invited to join the UK’s foremost international hotel design company where he remained for five years.

In 1994, Charles established his own design practice, CLA. Working mostly with entrepreneurs and hotel developers. In 2010 he was joined by Nicholas Black and in 2014 they formed the design partnership Leon Black.

Charles also lectures internationally on interface between design, neuroscience, economics, politics, philosophy, sociology, innovation, emotion and the workings of the designer’s mind. His talks provide a new, powerful and persuasive way of understanding why we think the way we do.

Charles is Past President of the BIID (British Institute of Interior Design), sit on the All Party Parliamentary Design and Innovation Committee and is guest lecturer at various design schools including Middlesex University, KLC, Inchbald and the Interior Design School.

For more information about Creative Workspaces and Bespoke Garden Offices, designed specifically for your needs, contact: